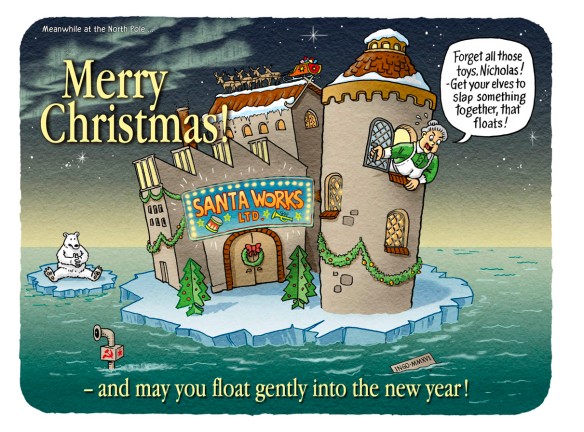 I haven’t seen my homeless friends M and C for a while but, fingers crossed, this is a good thing. A couple of months ago they dropped by the station and told me that after five years on the housing list living in boarding houses and sleeping rough, they’d been placed in social housing. They both hope they’ll be able to get some of their children back. Terrific news! A happy ending at last!
M said – Now I’ll be able to make a cup of tea in my underpants and never have to beg again!
Then he gave me a cheeky grin and asked me for 20 dollars so that they could spend their last homeless night in a motel. I passed the money over feeling foolish but as the weeks roll by and I no longer see them begging at their old haunts, I feel more and more that it was money well spent. So relieved.
Merry Christmas everybody! And may all your homes be warm and cozy or cool and comfy depending on your hemisphere! 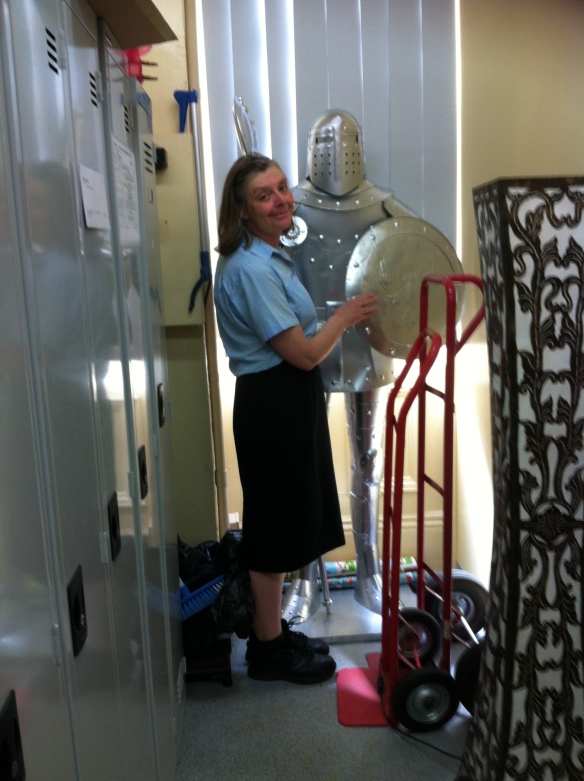 A new friend He was found in a railway station car park.

School’s out – at least for the final year students and it sure shows.

This week, the train driver and I suspected there were kids riding on the rear coupling of the 12.04.  A sticking out leg is kind of a giveaway.  When a driver looks in his rear view mirror the train behind should look smooooth.

“For those riding on the back I’m calling the police,” the driver said over the intercom.

I don’t know how they heard him, but the kids jumped off the back.  Then rear carriage doors opened and two more kids popped out followed by another and another and another.  In the end there must have been a dozen on the platform.

I was thinking about locking myself in the office.  12 teenagers is too much even for a big bold station host like me.  But they all jumped over the fence at the other end.  I could hear them laughing as they ran away through the park.  No doubt it was all about the narrow escape they’d had.  I suspect their interpretation of a narrow escape is different from mine.

O.K.  It’s time for some relief from things we cannot change (so that we can marshal our strength for the things we can.)

Time for another Station Story

My gloomy morning was vastly improved by scaring teenage train-surfers.

Here’s how it went.

The driver of the 11.37 down train got off and walked down the train to check the back for the kids he saw hopping on the back.  There were no kids there anymore, but they had graffitied all over the window of the rear driver’s cabin which meant the train was no longer safe to drive back to the city once it had reached its destination.  This is a major reason why your trains are cancelled, people!

I’ve started checking the back of all the trains now and with the next down train I hit pay dirt.

As I was checking the rear coupling some boys got off the final carriage. The head of one of them appeared around the end of the train.  He saw me on the opposite platform and waved sheepishly.  Suspicious.  There were four of them all around 13/14, clearly too young to know how to look innocent.

The train sat and sat in the platform.  3 minutes, 5 minutes.

I thought there must be some serious emergency so I went over to the opposite platform to see if the driver needed help.

The boys were milling round on platform 2.

“Why isn’t the train moving, Miss?”  (I love how cheeky boys manage to make Miss sound like an insult).

The cheekiest said “Can I have your beanie, Miss?”

“I’m just going to check what’s wrong,” I told them though I had already had an idea what was going on.

On seeing me the driver came down the platform.  “I’ve called the cops” he said, loud enough for the boys to hear.  “We’re just waiting for them to come.””

Wow the speed with which those boys took off! Impressive.  They ran and ran and didn’t stop running till they reached the other side of the second oval. No more riding down the line graffiting the back of trains for them that day.

I should have done a high five with the driver.  Result!

I accept an invitation to go speed dating.

At an old shabby restaurant in ‘the city’ on a rainy Saturday morning.

It’s pouring buckets as fifty other men and women, hoping to be the “chosen one,” enter the front door with shaky hearts and bodies.

We all have one thing in common.

With the awful tragedy unfolding in Nice, I almost didn’t post this – as my own semi-humorous fictional nightmare seemed trivial in comparison. But perhaps there is a need for laughter&…

Source: Moths in the Piano 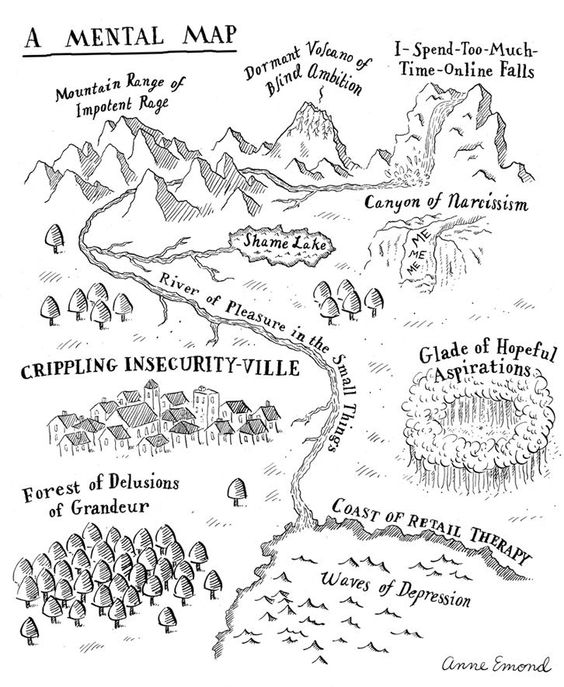 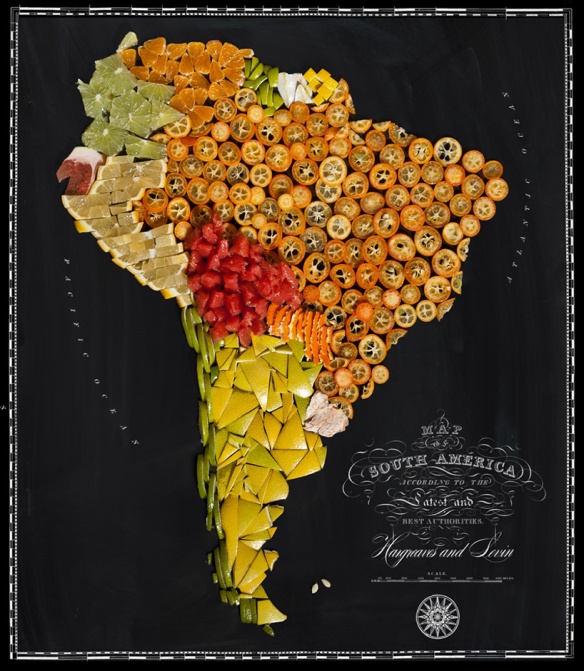 Map of South America made from citrus fruits 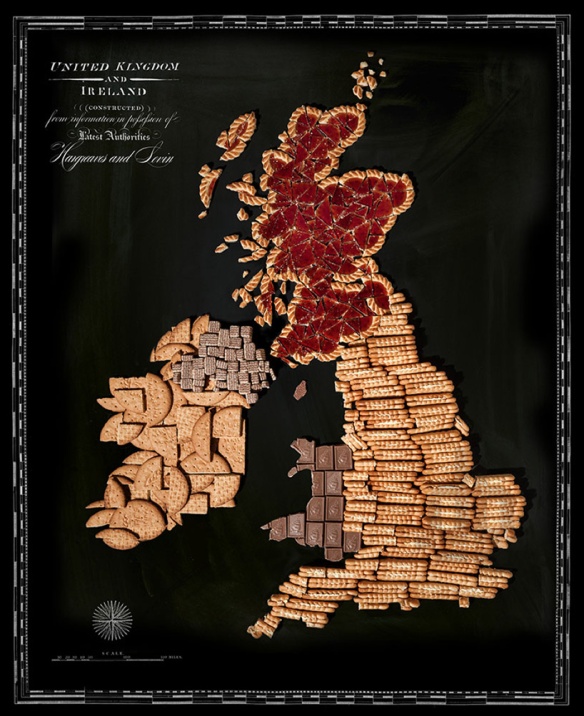 Map of the UK and Ireland made from biscuits 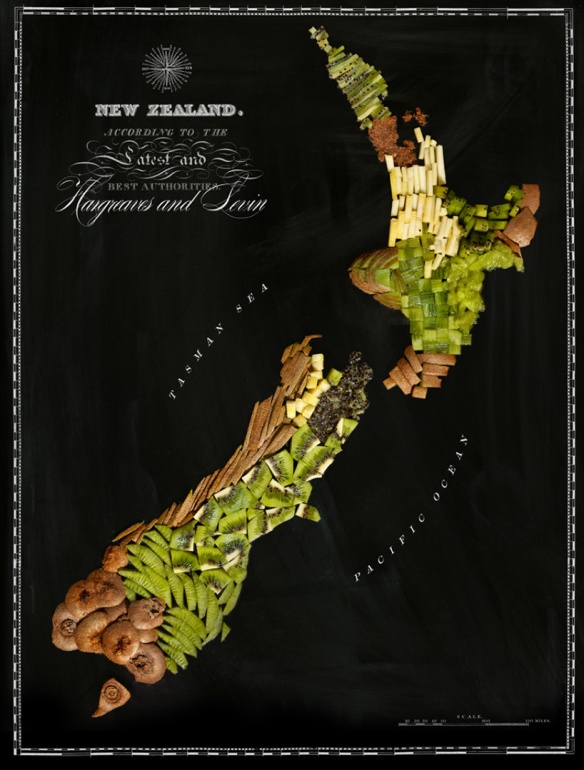 Map of New Zealand made from kiwis 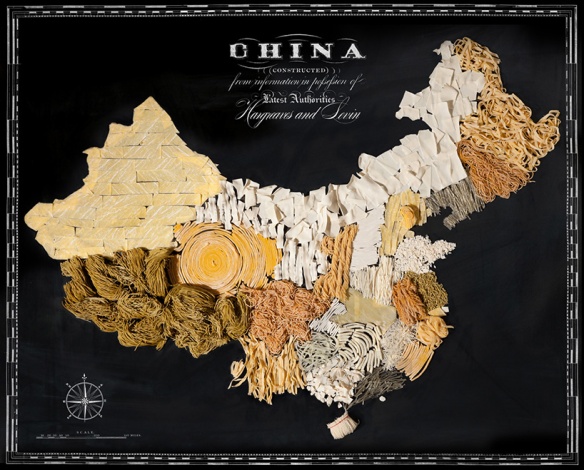 Map of China made from noodles 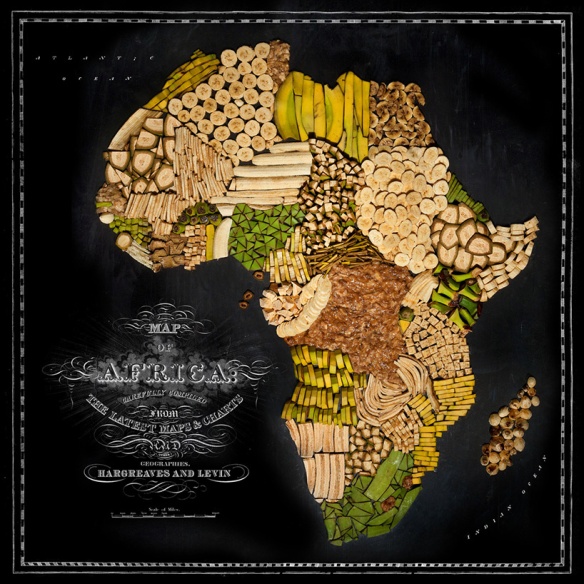 Map of Africa made from bananas 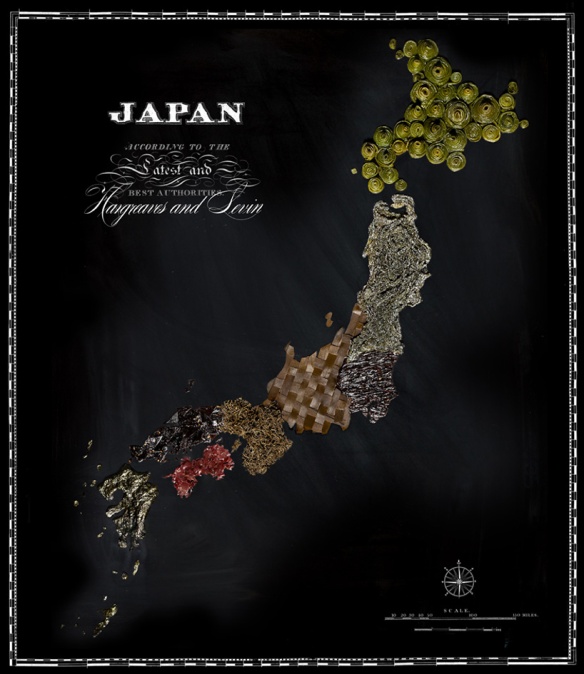 Map of Japan made from seaweed 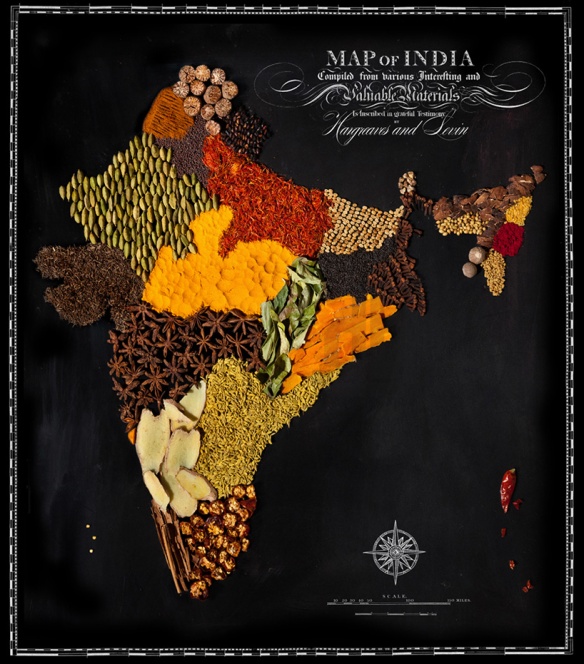 Map of India made from spices 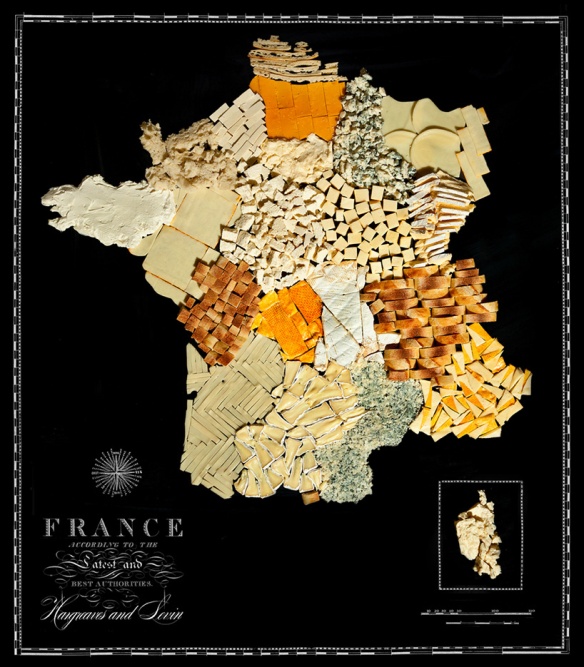 Map of France made from cheese 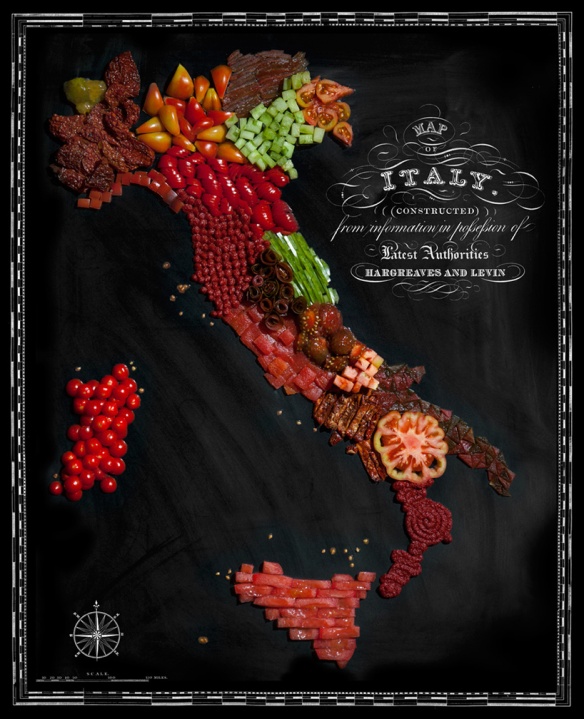 Map of Italy made from tomatoes 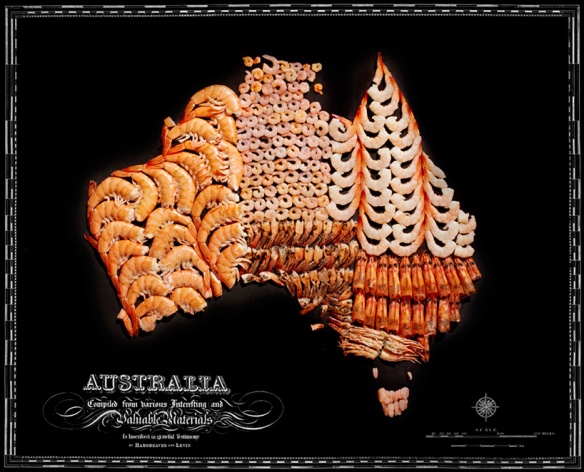 Map of Australia made from shrimp 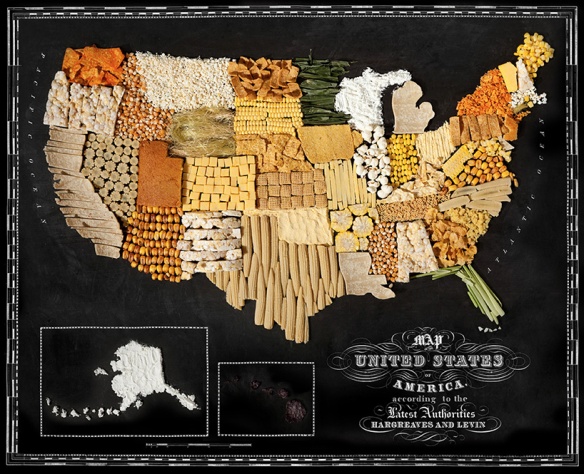 Map of the United States made from corn

Made by Henry Hargreaves and Caitlin Levin

On January 8, 57 AD, Tibullus, a freed slave in London, promised to repay 105 denarii, a hefty sum, to another freed slave named Gratus. Meanwhile, one friend admonished another that he’s lent too much money and is being gossiped about. And a merchant was making a desperate plea for repayment of debts owed to him.

We know all this, thanks to an archeological treasure recently unearthed, as reported by Atlas Obscura: over 400 writing tablets that document financial transactions that are the oldest handwritten documents discovered in England. As befits a business people, Romans founded London around 40 AD in order to facilitate commerce. And commerce means records. When recording something for posterity, the Romans used

Noisy miner in the waiting room

When working at the railway station or even just with the public, its important to keep an open mind. Last week I was giving the stink eye to a tough looking group of young men in hoodies and tattoos on platform 2 because I thought they were hanging around waiting to do a drug deal. I mean it’s the Zoo station!  There are children here!

I considered it particularly low that one of them had bought a baby capsule with him – clearly to hide his stash.  So I felt kind of mean when the train came in bringing a newcomer and one of them started showing the newcomer how the capsule worked.  I am so middle class!!  The capsule owner showed up later with his partner and toddler-in-pram and confirmed that yes, they had all been hanging around to pass the capsule on “to my cousin whose fiancée has just fallen pregnant.”  Just because someone is close to twenty and has tattoos doesn’t mean he can’t be a responsible family man, Jane.

On the other hand earlier this year a zoo-visiting Buddhist monk surprised me, by indicating I should use my broom to chase out the birds roving round the waiting room. I had expected him to be all “animals are my friends – all life is one” not “get that grubby bird out of the indoor space.” Another preconception bites the dust. Maybe I’m better off without either of them.

The Musings of a Writer / Freelance Editor in Training

I Speak With the Tongue of A Thousand White-Hot Lies!

The Future is Analog

simple living in a digital world

... a trip through the continent

Yet another tentacled thing

I am an author of stuff. This is my blog.

Tribalmystic is storytelling about people, places, and things that have extraordinary stories. Author: Joycelin Leahy

"What do we ever know that is higher than that power which, from time to time, seizes our lives, and reveals us startlingly to ourselves as creatures set down here bewildered?" -- Annie Dillard

Feathers of the Firebird

Celebrating the bit players of history

Life in the Realm of Fantasy

Echoes of Life, Love and Laughter

tell your stories, love your life